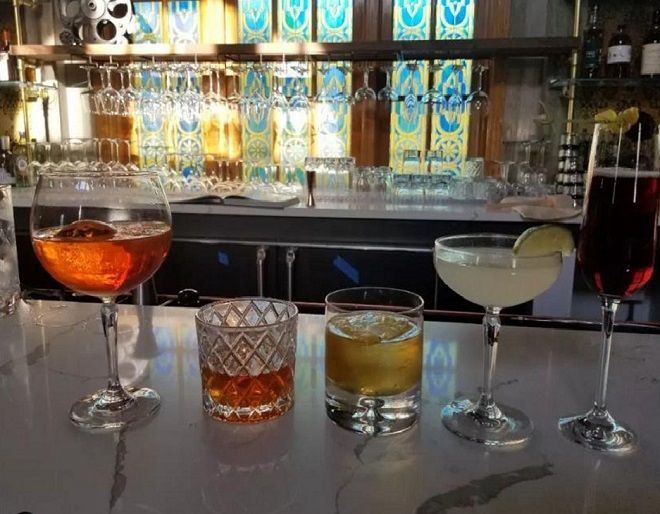 July 13, 2022: First came the piano bar at Underhills Crossing. Then, a wine bar at Ernie’s Wine Bar + EATS. Next, a beer bar at Beer Noggin. Now comes the latest addition to Bronxville’s nightlife: a cocktail bar at Whistling Rail.

Billed as a speakeasy, Whistling Rail is an artistically rendered homage to a bygone era, where cocktails are served in an under-the-radar vintage setting. Indeed, if you don’t know it’s there, you won’t know it’s there. The entrance is an unmarked door on the north end of the Bronxville station house. While no password is needed to enter, and the Bronxville PD isn’t likely to raid the joint, Whistling Rail captures these old-world vibes in other ways. Owner Charu Rana, with support from her husband, Paul Hugel, has painstakingly tended to every detail, even down to the ice cubes.

The six-page menu devotes four pages to cocktails, one to wine, and one to beer, cider, and two food items. “A true speakeasy shouldn’t serve food,” Rana explains. “Food should be limited to munching, not a knife and fork.” Thus, current offerings are a fruit-and-nut board and a cheese-and-charcuterie plate. That said, sporadic appearances by visiting food trucks will provide diversity while supporting other local businesses. Rana has also made a conscious choice to partner with women-owned businesses that make liqueur.

The cocktail menu is divided into four categories: Aperitifs, Refreshing, Sharp/Citrusy, and Spiritous. Of the nearly 25 selections, some are old-school classics like Penicillin and Kir Royale, while others are house inventions. For example, the crisp espresso martini is crafted from freshly brewed espresso made in the adjacent coffeehouse with a hint of simple syrup, rather than the cloyingly sweet concoction that might be found elsewhere. The menu is expected to change seasonally, with lighter potables offered in summer.

Though elegant, the ambiance is easy-going, with comfortable seating and period music that allows for audible conversation. Patrons are encouraged to linger for a refresher after commuting home from the city or pre-or post-dinner in town. “Give yourself some time to enjoy your cocktail and savor it,” Rana urges.

In the fall of 2020, the other half of the Bronxville station house became home to BXVL Coffeehouse, also owned by Rana and Hugel. Despite the challenges that the COVID-19 shutdown presented, the coffeehouse quickly became a community hub, with locals and others flocking to the welcoming setting for beverages, pastries, and light fare. Special events have included occasional appearances by food trucks and guest chefs, along with evenings of drinks and nibbles.

Rana’s career reset after working in finance began with plans to open a creperie or beer hall, but the historic stationhouse screamed “speakeasy” to her ears. She and her husband used to lament the distance they had to travel to find a cocktail bar and believed Whistling Rail would help fill a neighborhood void. “I’ve always liked cocktails and am always looking for people who take them seriously.” She’s also happy to “bring some action to this side of town.”

The speakeasy décor feels so spot-on that it’s surprising to hear that this was all DIY. Each aspect was selected after extensive research, driven by the need to preserve and highlight the historic, Spanish Mission-style building. Inspiration was drawn from Campbell’s Apartment in Grand Central Terminal and various speakeasies that the couple have frequented. Authenticity is important to Rana.

“The building is so gorgeous, the way it has a separate room: the high ceilings, the beautiful space. I knew we couldn’t let this space go to waste,” Rana recalled. With marble walls and large, arched windows, the setting easily evokes a prohibition-era establishment.

Whistling Rail is currently open only on Friday and Saturday nights, though additional days are under consideration (yes, please!).

We source the freshest and most flavorful ingredients from Mexico as well as local farms of the Hudson Valley.

Our vibrant indoor dining room and bar are chic and spacious with an upscale casual feel and comfy atmosphere.

Covered outdoor dining has spacious booths, with an individual heater above each table, cozy blankets and cushions.

Sundays: Family Night with a specially menu for niños.

Reservations for indoor and outdoor seating.