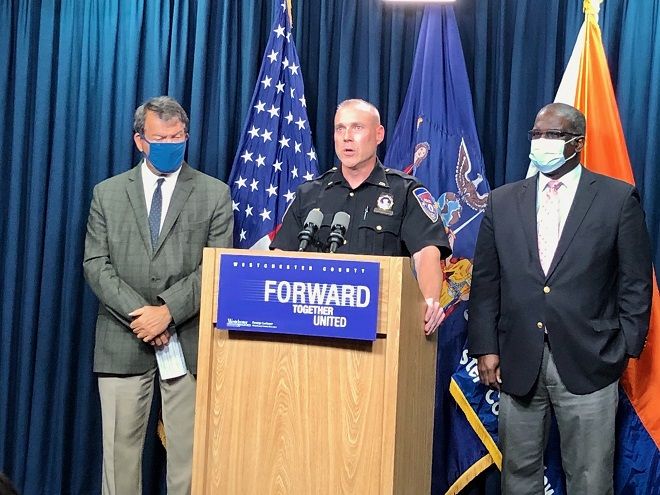 Have you seen -- and heard – an increase in the number of vehicles with loud/modified exhaust systems –including ones that emit a series of popping noises? So have we. Since July, our officers have issued about 140 summonses to drivers with these and other illegal, tricked-out exhaust systems.

Have you been sitting in traffic only to see other motorists go past by driving on the shoulder?  So have we. Our officers have issued multiple summonses for that violation.

Have you been in a line of traffic at an exit ramp only to see a car up ahead cut across the zebra stripes/hazard markings to jump the line? So have we. And we issued multiple summonses for that violation too. Overall, about 350 summonses have been issued during this “obnoxious driving” initiative.

“Our residents are fed up with the loud noise from these illegal exhaust systems. It has become a significant quality-of-life issue and I applaud the County Police for addressing it,” Latimer said.

Public Safety Commissioner Thomas A. Gleason said, “The enforcement we have conducted is in response to conditions that our officers see while on patrol and also in response to concerns brought to us by members of the public.”

Gleason noted that at the height of the Covid-19 pandemic, when traffic was lighter than usual, County Police saw – and addressed – an increase in drag racing on the parkways. Many of the vehicles engaged in those speed contests featured illegally modified exhaust systems. While the incidence of drag racing is down, many vehicles with modified exhaust systems remain on the road.

“Our Patrol officers, particularly on the midnight tour, have been vigilant and have effectively reduced drag racing incidents. Our Department does continue to receive telephone calls reporting a drag race in progress but when we respond there is no indication a drag race is occurring or has taken place. I believe the noise often being attributed to drag racing is actually the result of an increasing amount of vehicles that are operating with these illegal exhaust systems.”