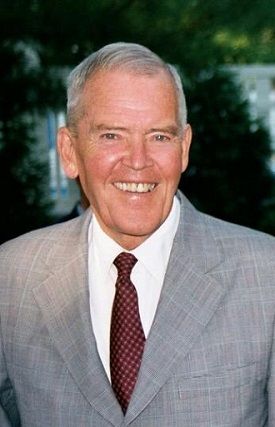 Bob was born at Lawrence Hospital, Bronxville in 1927 to the late Fred H and Katherine McGrath. He was predeceased by his brothers Fred O. and Jake and his sister Eleanor “Tot” McGrath.

After graduating from Bronxville HS in 1945 as a three-sport athlete, he attended Wesleyan University where he was a proud member of the football team that set a school record with 25 straight wins. He graduated in 1949 and started working for The American Can Company.

After the sudden passing of his father in 1954, Bob joined the family business at Fred H. McGrath & Son Funeral Home. This is where Bob made his strongest mark, not only on the Village of Bronxville but the surrounding area, providing a strong, reliable shoulder for families to lean on in their time of need.

Bob’s passions were his family and all things Bronxville, especially Bronxville HS Football. For over 25 years Bob helped coach the Varsity Football team leaving an indelible mark on many of his former players who still refer to him as “Coach” when they would call or visit him some 40-50 years after graduating. After coaching, he became a fixture in the end zone (because that’s where coaches always watch games) of home football games. For 76 years he continued the tradition his father started in 1943 of hosting the McGrath Football Dinner for the Bronxville football team at the conclusion of each season.

St. Joseph’s Church has been a constant in all of Bob’s 95 years. He was baptized in the church and went on to marry the love of his life, Bumpty there in 1954. He witnessed the baptism and marriage of all five of his children at St. Joseph’s and eventually saw many grandchildren baptized and one granddaughter married from there. Bob was also a founding member of the St. Joseph’s Men’s Club and was an integral part in developing their sports program where he helped coach many of the teams.

In his later years, nothing gave him more pride than spending time with his 14 grandchildren and watching their successes. Family was always first and he and Bumpty instilled that belief everyday through their actions. He leaves a legacy of family, faith and service to the community.

Calling Hours at the Fred H. McGrath & Son Funeral Home, Bronxville between the hours of 2 to 6pm Sunday. Mass of Christian Burial will be held at St. Joseph’s Church, Bronxville on Monday, November 7, 2022 at 10:45am.

In lieu of flowers contributions may be made to Jansen Hospice or the Bronxville School Foundation where the “Coach Bob McGrath Fund for Athletics” will be established. Please note this designation when making a donation and they can be done on the Foundation website (The fund appears in the drop-down menu under the question “Where would you like your donation to go?”) or by mailing a check to The Bronxville School Foundation, 177 Pondfield Rd. Bronxville, NY 10708.