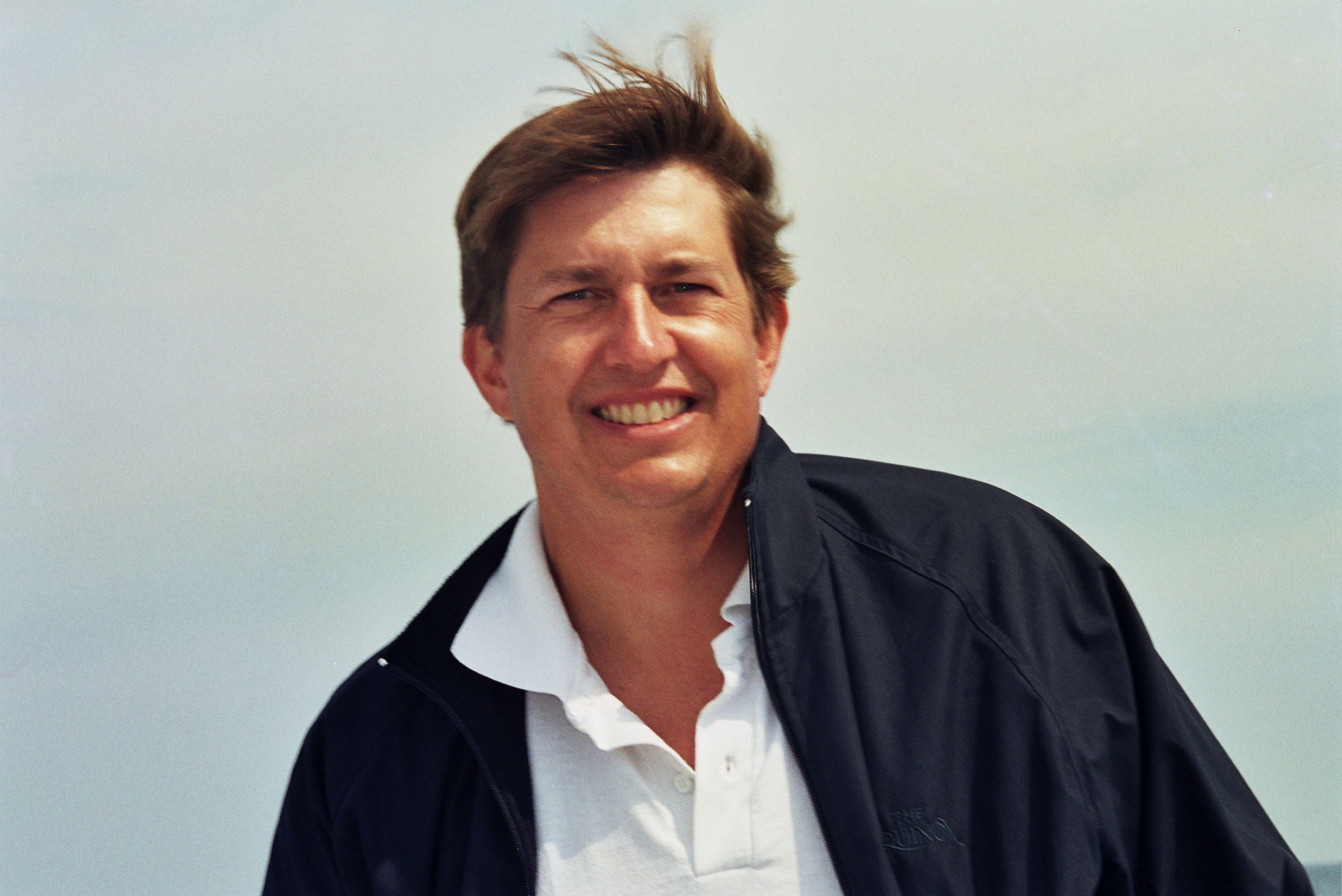 Nov. 2, 2022: On Wednesday, October 19, 2022, Charles Johnson Rollins (Chuck) passed away peacefully at age 63 from ALS. His devoted wife and childhood sweetheart, Jeanne Lightbody Rollins, was by his side. Chuck was a grateful man throughout his life and, more remarkably, throughout a devastating illness. In true form, he weathered the storm and found his way home with unrelenting focus, courage, strength and grace.

Chuck was a fun-loving father to his three children Elizabeth Wellington (husband Tyler), Lucy Rollins and Charlie Rollins; a devoted brother to Mark Rollins and Susan Reville Rollins; an adoring Grandfather (Pop) to Josephine Wellington; a raving fan of 14 nieces and nephews; and a friend and mentor to all who crossed his path. The genuine interest he took in the details of other people’s lives led to vibrant conversations and good feelings all around. To know Chuck Rollins was to love him.

Guided by his parents Ann and Mark Rollins, Chuck developed an unparalleled work ethic and appreciation for a job well done. By 11 years old, Chuck worked three jobs: pumping gas in boatyards, mowing lawns in his neighborhood and delivering newspapers throughout Mamaroneck, New York. On weekends, he and his siblings operated heavy machinery, cleared woods and built cabins at the family camp in Gardiner, New York.

Chuck was a grown-up Boy Scout who loved splitting and stacking wood and, more importantly, looking out for others. His sense of responsibility extended to his lifelong passion for running boats. Many times he acted with conviction and courage on the water to save people (and dogs) under duress.

Chuck attended Rye Neck High School, where he met Jeanne, before graduating with a BS in Business Administration from Western New England College in 1982. Chuck’s college experience extended far beyond the classroom. Playing drums in The Charlie Rollins Band and skippering yachts up and down the East Coast during summer breaks fostered a lifelong passion for working hard and playing hard. Whether he was sitting at his drum set or cutting through the waves on a motorboat, Chuck didn’t miss a beat.

In his twenties, Chuck left a promising career as a top district sales manager for Chrysler Corporation to join his brother and father at The Rollins Agency, a fourth-generation family business and insurance agency based in Westchester. He brought his love of family, and commitment to safety and security, to many families across the tri-state area. Chuck and his brother Mark kept shared values at the center of their mission as they expanded their family’s business with creativity and integrity.

A people person through and through, Chuck was exceptional in every aspect of his role as co-chairman and president of the agency. He received countless awards throughout his career. Traveler’s Insurance Company, for example, included Chuck and the agency in a select group of only 18 “Agents of the Year” out of 8,500 nationally. Most of all, Chuck’s hallmark sense of humor and sense of loyalty made him an exceptional boss. Over almost 40 years, The Rollins Agency had little to no employee turnover. At work, he was easygoing about what didn’t matter and serious about what mattered: taking care of people, supporting the local community and knocking it out of the park.

Ever the entrepreneur, Chuck also founded the Hudson Valley Agency Alliance alongside Mark. Together, the Rollins brothers built a second successful business from the ground up, all the while managing their family agency and raising their children.

Chuck’s big heart and personal strengths shaped his work as a community leader, where he was always the first to pay it forward. He served as Trustee of the Mamaroneck United Methodist Church during their extensive restoration campaign. Chuck also brought joy to his community as the drummer for the charitably-based rock band The Circuit Riders for 15 years and then as a member of Free Lunch Rock Band.

As the past president of the Rotary Club of Bronxville, Chuck embodied the Rotarian motto of “Service above self.” He was the past president of The Community Fund of Eastchester, Bronxville and Tuckahoe, which annually raises over $500,000 for community agencies and grants. As president, Chuck organized start-up funds for Heartsong, a no-fee music and art therapy program for children with disabilities. Chuck was the past treasurer of Bronxville Chamber of Commerce and actively participated in the Westchester County Association and The Bereavement Center of Westchester.

Once a month for more than 20 years, Chuck delivered shirts, suits, shoes and meals to men entering the workforce after prison life or homelessness with Midnight Run. In both formal and informal ways, Chuck made a profound difference in the world by mentoring hundreds of people.

Chuck’s contributions to his colleagues and community were extraordinary. His life expanded personally and professionally around his steadfast efforts to prepare, protect and provide. His remarkable legacy as a person was most palpable at home in his role as a devoted husband, father and grandfather. Chuck balanced his steadfast, absolute support for his family with excitement and spontaneity. He was joyfully present every day, from his first cup of coffee with Jeanne to stargazing with his children at night. Chuck attended every sports game, recital and parents’ weekend and enjoyed many timeless moments by the firepit with his family — always telling jokes.

Chuck was larger than life. He lit up every room he entered. He embodied a good time. Chuck had a keen sense of awareness and perception. He was always the first to notice a seal in the ocean or a hawk alighting on a tree top; he found solace and awe in the outdoors. He knew when to make a joke, when to laugh, when to cry, and he made everyone feel special. His kindheartedness, generosity and sense of humor knew no bounds. He lived a beautiful life surrounded by wonderful people.

Chuck used to say, “If you want to feel good, do good.” Chuck did good. And his loved ones and community will carry that legacy forward. Chuck also said throughout his life, “I hate to ruin the ending for you, but everything is going to be okay.” Because of the way Chuck Rollins lived, all who loved him will be okay.

A celebration of life will be held at Enders Island, a retreat center in Mystic, Connecticut, on Saturday, November 19, 2022 at 11:00 a.m. Please dress classy, casual and prepared for any weather just like Chuck. In lieu of flowers, please send donations to Midnight Run at 97 Main Street in Dobbs Ferry, New York: https://midnightrun.org/contribute