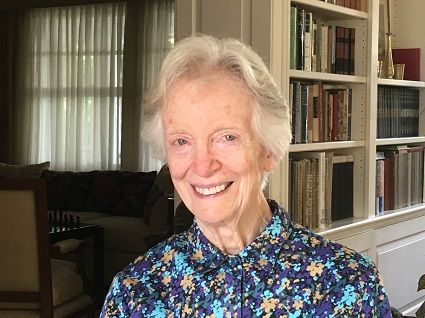 Anne Curtis Fredericks, teacher, editor, and friend to many, and whose joie de vivre, intellect and energy enlivened the Bronxville community for the better part of nine decades, died peacefully at her home on October 10, 2022.  She was 96.

Anne moved to Bronxville in May 1927 at the age of 2.  Her parents, Edward G. Curtis, a Downeast Maine-born patent attorney, and Mary Helen (Seelbach) Curtis, a Kentucky transplant, had followed a still-familiar Bronxville pattern – moving from “The City” to the suburbs to raise a family.  But few residents today are old enough to remember, as Anne could, growing up when trolley tracks still ran along the White Plains Road, when ice in the summer was chipped off a giant block and delivered door-to-door from the local iceman’s truck, and when one could still visit the cow, owned by the formidable Miss Amie Dusenberry, pastured in the green field at the south end of what is now Greenfield Avenue.

After nine years at the Bronxville School, Anne graduated from the Madeira School in 1943, and from Vassar College in 1946 (college programs then were accelerated due to World War II).  Armed with her proficiency in French, the young Anne and a few enterprising Vassar classmates persuaded their parents to let them study for a further year at the University of Geneva.  Although the University ran out of heating fuel and had to suspend classes in the winter of 1947, the upside was that Anne and friends were able to spend the next few months travelling in Europe, conveniently arriving in England in time to attend the first post-war commemorative balls at both Oxford and Cambridge.

She then took graduate courses at Columbia University; taught English for a year at Madeira; went to France in 1948 to work as assistant to the managing editor of the Paris Tribune; and then landed a post as an administrative assistant in the Office of the Deputy Director of the Central Intelligence Agency, Allen Dulles, in Washington.  There she met USAF Lt. Col. Wayne Fredericks, a decorated WWII pilot who had been recalled to active duty during the Korean War.  They wed at the Bronxville Reformed Church in 1952 and were married until Wayne’s death in 2004.

Anne and Wayne returned to Bronxville in 1956, when Wayne took a position at the Ford Foundation to help expand its overseas development projects.  Except for 1961 to 1967, when Wayne served as Deputy (and later Acting) Assistant Secretary of State for African Affairs in the Kennedy and Johnson administrations and the family was back in Washington, she would spend the next 66 years in the Village.  Her husband’s long career in international affairs and development work gave Anne the opportunity to travel with him far beyond Europe and across Asia, the Middle East and, beginning in 1954, broad swaths of Africa -- but Bronxville was home.

In Bronxville her many activities included multiple terms as chair of the Bronxville Adult School; member and president of a local literary group; and member and president of The Little Forum, a local public affairs group.  And while she had many dear friends in the Village from her generation – of which she was one of the very last survivors – Anne always enjoyed meeting “younger people.”  As her own children grew up, they would often have the sneaking suspicion that their own school and college friends enjoyed coming back to Bronxville as much to visit her as them.  In her seventies, a neighbor’s second grader asked if he could “borrow” her for a Grandparents’ Day event that none of his own grandparents could attend – and of course she was delighted to accept!

At the same time, Anne energetically pursued a wide array of activities outside the Village.  She was the driving force behind two charities, one that assisted community development and artists in Africa, and another that aided children (both Protestant and Catholic) during the “time of troubles” in Northern Ireland.  In New York City, she was a long-time member and Governor of the Cosmopolitan Club. In the 1980s, Anne was asked to rejoin The Madeira School’s board (on which she had also served in the 1960s when she was head of the school’s alumnae association), and was appointed co-chair of the board’s search committee for the next head-of-school.

When not engaged in the foregoing pursuits or tending to her garden, Anne was an accomplished editor and occasional author.  Her edited works included Prof. John Spencer’s critically praised Ethiopia at Bay of 1987 (which the Times Literary Supplement, for example, described as a work that “commands attention and respect”) and several books on international development and security written by friend and former U.N. General Assembly President and Nigerian foreign minister Joseph Nanven Garba.  Closer to home, she authored a chapter in Eloise Morgan’s and Dr. Marilyn Hill’s definitive history of Bronxville, Building a Suburban Village (1998), and the article entitled “Election Fever in Bronxville: 1936” for the Historical Conservancy’s Bronxville Journal -- which, ironically for a woman who would become a lifelong Democrat, chronicled an earlier time in her hometown when it was borderline scandalous to have supported Franklin Roosevelt for President!

Above all else, however, Anne was devoted to her friends and family.  Her three siblings – Mary Gilman Brooks (1922-2014), Eleanor van Hoogstraten (1926-2019), and Edward M. Curtis (1930-1984) – also grew up in Bronxville, returned to Bronxville at various times, and raised their children here.  After the death of her mother, Mary Helen Curtis, who lived in her own house in the Village for an astonishing 70 years, Anne became the de facto matriarch of a large Bronxville-connected clan.

Anne’s survivors include her beloved children Maria Fredericks (of Manhattan), son William and daughter-in-law Ivy Lindstrom Fredericks (of Bronxville), and grandchildren Charlotte (of Washington D.C.) and Thomas (of Chicago), as well as numerous nieces and nephews.  One of her great joys was hosting large family gatherings at her longtime home in the Village.  She will be missed.

A memorial service will be held at the Reformed Church in Bronxville at 2p.m. on October 21, 2022.  In lieu of flowers, donations can be made to The Community Fund, c/o www.thecommunityfund.org.