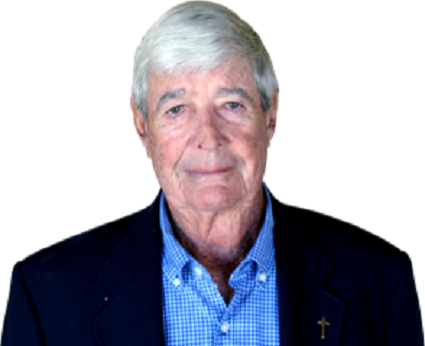 Sept. 22, 2021: Paul Charles Delaney of Mystic, CT, and Vero Beach, FL, died peacefully at home in Mystic on Sunday, August 29. The cause of death was complications of heart failure.

Following high school, he attended Niagara University for two years before joining the Naval Aviation Cadet Program. He later received his Bachelor of Science from New York University’s School of Commerce, Accounts and Finance. Starting his career in the fund-raising field, he moved on to commercial real estate, first in New York City and later in White Plains.

Paul is survived by his beloved wife of 41 years, Linda; three children: Noreen Delaney Polidoro (Joseph); Sheila Delaney; Robert Delaney (Joanna) and three grandsons; his stepchildren: Robert, Catharine and William Becket (Rachel) and two step-grandsons. He was predeceased by brothers John (Jack) and Raymond (Ray). In addition, he leaves behind four adored nieces and a nephew.

A lifelong New York Giants and Yankee fan, Paul was also an avid tennis and platform tennis player and in later years a golfer.

He was a proud member—and unofficial captain—of “Legends” groups at the Bronxville (NY) Field Club, Sea Oaks Beach and Tennis Club (Vero Beach) and Stonington (CT) Country Club. He translated his love of these sports into fundraising efforts for his favorite causes—the Visiting Nurse Service of Westchester (NY), the Mardy Fish Children’s Foundation of Vero Beach and the Recovery programs at Enders Island, Mystic—for which he organized tennis and golfing tournaments.

In 2018, he was the proud recipient of the St. Edmund’s Medal of Honor in recognition of his years of commitment to the Recovery Endowment Fund and
as a faithful servant of the Church and the community.

The family would like to give special thanks for the friendship and care of Dr. Michael Feltes and for the extraordinary support provided by the Hartford HealthCare at Home Hospice Care team.

Donations in Paul’s memory may be made to the Mardy Fish Children’s Foundation or the Recovery Residence Community at Enders Island, PO Box 399, Mystic, CT 06355 or online at www.endersisland.org/