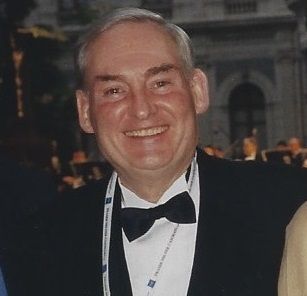 May 5, 2021: Paul Michael Frank passed away peacefully, surrounded by his loving family, on April 26, 2021, after a brief respiratory illness.

Born in the Bronx, NY on January 5, 1939 to Otto H. Frank and Mary Brennan Frank, Paul spent his childhood in the Bronx and later moved with his parents and brothers, Gerard and William, to Bronxville, NY.  He attended All Hallows Grammar School and Fordham Preparatory School, graduating as a proud member of the class of 1956.

He began his career at the law firm of Alexander & Green and was a Partner in its subsequent merged firms of Walter, Conston, Alexander & Green and Alston & Bird.  Most recently, he was a Partner in the New York office of Hodgson Russ.  In a career that spanned more than 50 years, Paul developed a practice in international corporate law. He particularly enjoyed the work he performed for clients throughout Latin America, as well as his work representing numerous foundations, endowments and non-profits focused on Education and the Arts.

Paul met his wife, Jane Leary, in 1971, and they were married on June 22, 1973 at the Church of Saint Joseph’s in Bronxville, NY.  Paul and Jane have called Bronxville their home for the past 41 years.

A consummate "people person," Paul was most happy when he was around others. With his keen intellect and remarkable memory for dates and facts, Paul was famous for always having a good story on the tip of his tongue. He loved to connect with people from all walks of life, and his genuine interest in others was palpable until his very last days.

Among Paul’s many strengths were his curiosity, patience, loyalty, generosity, optimism, and his steadfast faith in God. Paul’s love of travel, his sense of adventure, and his repertoire of knowledge had a lasting impact on everyone who knew him. He was a wonderful man, who had a twinkle in his eye and a smile ready to be dispatched at any hour of the day.

Paul adored family, friends and good conversation.  He was an extraordinarily proud father of his two daughters, Courtney and Christina, and a loving grandfather to his six grandchildren, who affectionately called him Pablo.

Paul is survived by his wife of 47 years, Jane, by his daughter Courtney Galligan and her husband Greg of Darien, CT, and his daughter Christina Frank of New York, NY.  He will also be forever remembered and loved by his grandchildren: Madeline, Caroline, Katherine and Gavin Galligan, and Jack and Grace Caspersen. Paul is also survived by his brothers Gerry Frank of Denver, CO and Bill Frank of Darien, CT, as well as his many nieces and nephews.