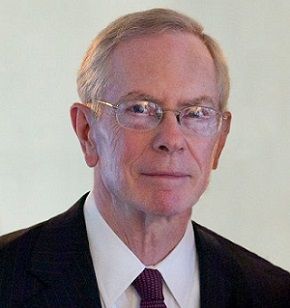 His family and many friends will greatly miss Bill for the way he embraced life and made them feel so comfortable, always displaying a sense of warmth to everyone he met.

Born on August 18, 1936, to Elizabeth Grant and Alfred Hand, Bill grew up in Washington D.C., where he attended St. Albans School.  He graduated from Yale University in 1958 and began his career in finance at Chemical Bank in New York City.  A few years later, he joined A.G. Becker, where he became the Municipal Bond Syndicate Manager.

In 1977, Bill moved to Smith Barney, later becoming a Director responsible for competitive bidding in the Municipal Syndicate and Trading Department.  Bill is remembered fondly by those who worked with him over the next twenty years, many calling him a “true gentleman,” someone who was very respected in his field and taught them a great deal by his example.

Bill did not let his work schedule stand in the way of volunteering in the community he loved, Bronxville.  He served on the board of the United Way of Bronxville, Eastchester, and Tuckahoe, acted as President of the Bronxville Field Club, and was a member of the Bronxville Adult School Board.  He also enjoyed his volunteer work at Lawrence Hospital, where he made many friends as he pushed patients in wheelchairs to get an x-ray or a test.

Bill’s life was hallmarked by his loyalty, integrity, humility, kindness, and sense of humor.  Above all else, he was devoted to his family and friends.

He treasured his family vacations in Maine, ski trips at Stowe, barbecues with friends on summer weekends, and the time he spent with his extended family in and around Washington D.C.  He also loved sailing on his boat in New York Harbor and Long Island Sound, the hours he spent pouring over ads for classic cars, and his reunions at St. Albans School with long-time friends.

Even after being diagnosed with Parkinson’s Disease, Bill never complained and accepted the news with dignity and courage.  He devoted himself to workouts at the gym and long walks, which helped him stave off the disease for many years.

Bill is survived by his wife of 52 years, Nancy Dube, his daughter Caroline Romita and her husband Tom, his son Bill and his wife Amy, and three grandchildren, Casey, Nicky, and Mackenzie.  He also left behind his sister, Sarah H. Herren, her husband John, and their three children.

A memorial mass will be held at St. Joseph’s Church in Bronxville on Friday, April 30 at 10:45 am.  In lieu of flowers, donations may be sent to St. Albans School, Mount St. Alban, Washington, D.C. 20016, or to your favorite charity.