From the Mayor: History of Thanksgiving 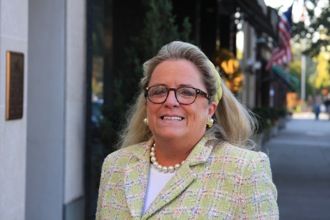 Nov. 23, 2022: As I write, Thanksgiving is upon us and the grocery stores, butchers and bake shops are teaming with customers bringing additional energy to our wonderful Village. Succumbing to my love of research, I delved a bit into the history of the upcoming holiday.

Much of the writing about the first Thanksgiving doesn’t quite meet historical muster but we know a meal was held in 1621 sometime between September 21 and November 11 by the Wampanoag Indians and the Pilgrims in Plymouth Massachusetts to give thanks to God for surviving a brutal winter and reaping a plentiful harvest, and it is said the first Thanksgiving feast lasted three days!

Thanksgiving was historically a religious observance to give thanks to God for a plentiful harvest, to commemorate a military victory, or even to celebrate the adoption of a state’s constitution but has evolved into a secular celebration. As example, a Thanksgiving Day celebration was held in December 1777 in the colonies to commemorate the defeat of the British at the Battle of Saratoga.

Since 1777, a National Proclamation of Thanksgiving has been declared, first by the Continental Congress, who wanted to thank the Almighty for, “The greatest of all humans blessings; independence and peace.”

A little known, but poignant tradition in our country since its founding, has been a yearly Proclamation issued by the sitting President.

President George Washington created the first Thanksgiving Day Proclamation by a national government, with words that are particularly apropos today. He besieged the people of United States to, “Be a government of wise, just and constitutional laws.” Thomas Jefferson, in contrast, penned no Thanksgiving messages as he felt the holiday supported state, sponsored religion as in his view the day was rooted in Puritan traditions.

President Lincoln believed that, despite being mired in a divisive and deadly Civil War, we as Americans still had so much for which to give thanks and he asked, “For the Almighty hand to heal the wounds of the nation, and to restore it as soon as may be consistent with divine purposes, to the full enjoyment of peace, harmony and tranquility.”  Lincoln also declared the final Thursday of November as the national day of Thanksgiving and it was his son Tad who inadvertently began the tradition of pardoning turkeys, as he wanted a turkey gifted to the Lincolns be spared from being cooked for dinner.

However, it took until 1941 and the relentless effort of an influential magazine editor and author Sarah Hale, to make it a national holiday. Miss Hale’s other enduring claim to fame came as the author of the nursery rhyme, “Mary had a Little Lamb.”

In an effort to help businesses, President Franklin D. Roosevelt became embroiled in a major controversy over the date of Thanksgiving. In 1939, retailors asked the President to move the date up from the last Thursday of November to the fourth Thursday in hopes of gaining an additional week of Christmas shopping. When he acquiesced and signed his proclamation with a date of the 23rd instead of the 30th of November, school vacations were disrupted, and parades and football games had to be rescheduled. The Mayor of Atlantic City was so incensed that he called the “new” holiday “Franksgiving!” Our cherished tradition of the Macy’s parade also evolved from economic needs. In an effort to launch the shopping season in 1920, Macy’s employees paraded down Fifth Avenue with animals borrowed from the Central Park Zoo!

President Obama‘s first Thanksgiving proclamation has proven so prescient as today one in six of our neighbors in Westchester County live with a food insufficiency. He asked Americans to reach out to our neighbors and fellow citizens in need of a helping hand. “This is a time for us to renew our bonds with one another, and we can fulfill that commitment by serving our communities and our nation throughout the year” as he issued a call to action to every American to help others in need.

I would argue we need to heed his message more than ever in 2022 as one only has to read the paper or watch the news to know that more Americans are in need of help this year than years’ past. Lines are longer at food pantries, supplies are depleted and costs have skyrocketed.  Spending a day in New York City this past weekend, I witnessed the lines for Thanksgiving food sharing stretching around corners. Again, one of the most efficient groups in distributing food to the needy throughout our county is Feed Westchester. I urge you to think about donating.

President Biden, as I write this, has yet to issue his 2022 Thanksgiving Proclamation, but his 2021 proclamation centered on the tragedy and sadness of the Covid epidemic as he closed with the lines, “We will be thinking of the many families feeling the pain of an empty chair at the Thanksgiving table. You are not alone. Our nation stands with you.” Sadly, the message is still needed in 2022.

As the holiday season officially begins, may we give thanks for all the blessings we have and share our bounty with others.