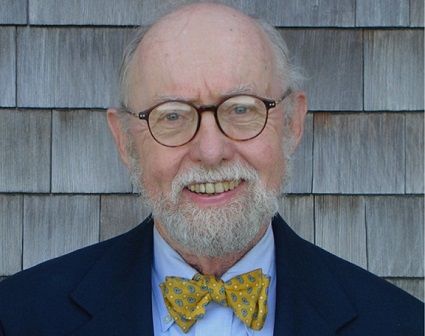 Nov. 25, 2020: Fred Hills, longtime summer resident of Shelter Island, died on Nov. 7 at age 85. He died at his home in Bronxville with his family by his side.

Born in 1934 in East Orange, N.J., Fred grew up during the Depression in an apartment above a candy store, delivering newspapers early in the morning. Fred said in later years that the family “never felt poor, we just didn’t have any money.”

He won a scholarship to Columbia University and was mentored by poet Mark van Doren and literary critic Lionel Trilling. After Columbia, Fred moved on to Stanford, where he studied with novelist Wallace Stegner.

Fred’s publishing career began at McGraw-Hill. He worked his way up to editor-in-chief of the college text division. In 1972, McGraw-Hill was rocked by scandal when a heralded Howard Hughes biography turned out to be entirely fabricated. CEO Harold McGraw decided it was time for a reliable hand on the tiller to run the trade book division; Fred Hills was his choice. With a team of skeptical editors to manage, Fred took the helm, a formidable challenge, and a dream job.

Fred quickly established himself as a legendary negotiator and brilliant acquisition editor. He met his future wife, Kathy Matthews, at McGraw-Hill. He later joked that his greatest acquisition was convincing her to marry him in 1980.

Testifying to his boundless energy, his family said, he continued to carry a full workload while serving as a juror on the 1971 Black Panther trial, at the time the longest and most expensive trial in New York State history. One defendant, Afeni Shakur, who was pregnant with legendary rapper Tupac Shakur during the trial, told Fred at a book launch in 2005 that the eventual acquittal “saved her life.”

After seven years at McGraw-Hill, where he edited the likes of Nabokov and Heinrich Boll, Fred was ready to shed managerial duties; the real satisfaction was working with authors and their manuscripts. He joined publisher Simon & Schuster as a senior editor and, during his 26-year tenure, published over 50 New York Times hardcover best sellers, including nine in a single year.

As he said at his retirement party in 2006, “I’ve been at it for over four decades and still find publishing an addictive profession. You’re always in the middle of some terrific project and don’t want to let go. It is also the tremendous pleasure of conducting your education in public with brilliant and interesting people while actually getting paid for it. Editors are a bit like hermit crabs: we inhabit an author’s shell for a year or two, get the feel of that world, and then scuttle along to the next one.”

Many of Fred’s books were acquired based on a personal interest. Richard Ferber’s “Solve Your Child’s Sleep Problems” was a desperate move to get some shut-eye following the birth of his son Greg. John Rousmaniere’s “Annapolis Book of Seamanship” was a deep dive into the world of sailing, one of Fred’s great interests.

Bernard Gladstone, author of “The New York Times Book of Home Repair” guided Fred through the task of building his beloved home on Shelter Island and renovating the Carroll Gardens brownstone where he lived for 13 years. Fred was an avid runner since high school and was delighted to work with George Sheehan on his book “This Running Life” — an experience that no doubt helped him win his age group (70-74) in the Shelter Island 10K in 2009.

Fred spent every summer for 35 years on Shelter Island, where he sailed and raced his Herreshoff 12 1/2, hosted legendary fireworks parties on his deck, enjoyed many friendships and supported various Island institutions. He served as a Trustee for Friends of the Shelter Island Library, was an avid patron of the Perlman Music Program, and a member of the Shelter Island Yacht Club, where he edited their centennial anniversary book.

Immediately following his retirement, he spent 10 winters in San Miguel de Allende, Mexico, giving workshops at the International Writers Conference there. He did editing for Dance Theater of Harlem’s newsletter and was a devoted patron of their Sunday matinee events.

Fred was predeceased by his brother Carter and sister Deborah. Fred is survived by his brother Stuart and four children, Christina Hills Brown and Bradford Hills (from his first marriage, to Patricia Hills), Greg and Ted Hills from his marriage to Kathy, and granddaughter Magenta Brown.