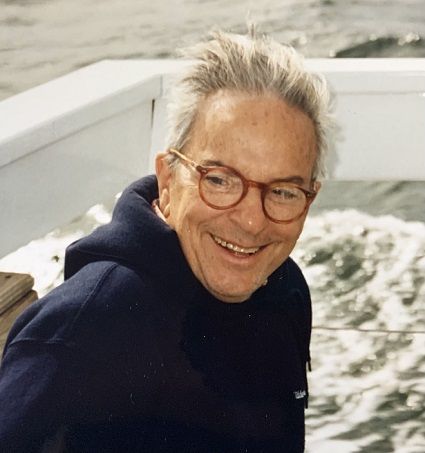 Oct. 6, 2021: On the morning of October 1, 2021, the world lost a kind, loving and responsible man who served his country during WWII, cherished his wife Mary of 61 years and loved and provided for his three children, David, Hope and Mary.

Born in Brooklyn on September 23, 1927, William George Turino, Jr. passed peacefully on October 1, 2021, surrounded by his children and sister Jeanette.  Bill was raised in Bensonhurst Brooklyn and graduated from Xavier High School in Manhattan where he excelled academically.  After attending his freshman year at Dartmouth College, Bill joined the Navy at age 17 and served in the medical corp. as a Pharmacist’s Mate 3rd class at the end of World War II.  Honorably discharged in 1947, he returned to finish his AB degree and graduated from Dartmouth College as a proud member of the class of 1950.

After college, he went to work at the family import/export business founded by his father William G. Turino and Uncle Michael Turino.  In June 1956 he married Mary Armistead Bahr at Trinity Church in lower Manhattan.  The young couple moved to Bronxville, NY in 1963 and raised three children.  After selling the family business in the early 1970’s, Bill changed careers.  Always fascinated by the investment business and the lore of Wall Street, he joined J. Bush & Company (Johnathan Bush was the brother of former president George H.W. Bush) as a financial analyst covering the oil and gas industry.   He later transitioned to brokerage and wealth management, working at Fahnestock & Company and then Kidder Peabody as a vice president.  He ended his career at Merrill Lynch, retiring in 1996 with Mary to their summer home in East Hampton.

A good athlete, Bill was an accomplished and graceful skier who also enjoyed playing tennis and golf.  He was a long-time member of the Bronxville Field Club as well as the Bridgehampton Club and the Devon Yacht Club on eastern Long Island.  Bill was gregarious and enjoyed the Bronxville cocktail party circuit.  He was a proud alumnus of Dartmouth College and a loving husband to his wife, Mary for 61 years until her death in 2017.  He is survived by his sister Jeanette Russo-Alesi, his three children David, Hope and Mary Turino, daughter-in-law Cathy Shea, son-in-law Al Hemberger as well as three grandchildren, Lily Turino, and Raina and Wiley Hemberger.

A memorial service is being planned at Christ Church, Bronxville, NY on Saturday afternoon October 9th.